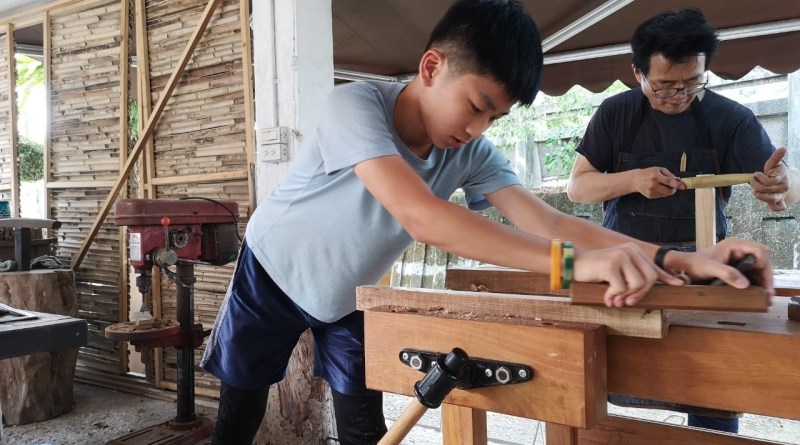 Despite the fact that experimental education has been given due attention, students who accept experimental education still run into some difficulties or challenges. Shu Yu Hu(胡淑裕), a teacher of Ci Sin Waldorf School, indicated that there is a common problem faced by students in this school when they prepare for General Scholastic Ability Test(學測) or Advanced Subjects Test(大學入學指定科目考試). Generally speaking, schools of experimental education do not pay much attention to training their students to take exams. Besides, the amount of time Ci Sin Waldorf spent in teaching students science and math is relatively shorter than that of ordinary senior high schools(普通高中). That’s the reason why she usually suggests students who would like to enter medical college or technical college to transfer to other schools.

However, she recalled that some students who would like to enter medical colleges insisted to stay in Ci Sin Waldorf School explaining that they can learn subjects such as math and science in cram schools, but it’s hard for them to have feature curriculum offered by Ci Sin Waldorf School in cram schools or ordinary senior high schools. These students are classic examples of those who receive experimental education.

They usually need to go to cram schools to prepare for General Scholastic Ability Test or Advanced Subjects Test after tenth grade. Meanwhile, they also need to strike a balance between their school work and preparing for the entrance examination which is not an easy thing for them. Take the students of Ci Sin Waldorf School for example, all the students need to finish their graduation projects in twelfth grade. Besides, they need to do their drama production before they graduate. “They are really busy with their school work before graduation,” said Hu.

The good news is that over the past few years, there are more admission opportunities provided by the universities for the students. Hu mentioned that many students of Ci Sin Waldorf School enter universities through the Star Plan in Taiwan’s College Entrance System(繁星計畫) these past years. What’s more, a lot of universities in Taiwan have put Early Admission without GSAT(特殊選才招生) into practice for several years.

This type of students usually have a lot of unique experiences in senior high schools, such as joining competitions, setting up a club or publishing a book. The third type would be students who are unsatisfied with the ordinary education in the university and have desires for more possibility in learning and exploring by themselves. “However, this kind of students needs to be evaluated more carefully when they send their applications for ‘Self-Designed Major.’ They should have certain directions in their college life when exploring new things,” said Chen.

Natalie Lin is in her junior year in National Tsing Hua University, enrolling in the “Self-Designed Major program”. She suffered from a rare disease called Still-disease(史迪爾氏症), which is autoimmune disorder associated with systemic inflammation(全身性發炎的自體免疫系統失調) since she was 16. That’s the reason why she can’t go to school when she was being treated and was recuperating at home. Lin suspended her schooling and had transferred to different schools for many times during her seven years of treatment.

She resorted to homeschooling, which is a kind of experimental education and was able to obtain her high school diploma successfully. “Homeschooling is a process I have experienced from introspection to self-awareness ,” Lin said frankly in her 2016 EDU TALK. During the period of homeschooling, Lin took many college online courses. She also signed up for citizen journalists training camp(公民記者培訓營). Moreover, she went to interview people nearby Chungking Mansions in Hong Kong, which were inhabited by temporary workers, asylum seekers and domestic workers.

However, in the 2019 International Innovation Education Forum, Lin stressed the importance of “learning, interacting with interesting people and keep challenging difficult things.” In her exploration, she has found what she wants to learn because of the freedom given by experimental education. In 2017, Lin was admitted into National Tsing Hua University through the Gleaners’ Project,(拾穗計畫). She has dedicated herself to researching on issues about education, social culture and social care. She believed that there is still much room for improvement in Taiwan’s education system and has never regretted her decision of choosing homeschooling in high school.

Compared with ordinary university students, there are still many challenges for Lin to overcome. She must plan her own courses actively instead of taking courses scheduled by her school. She said that she has to know how to arrange her time and how to schedule better than her professor which is not an easy thing. In fact, more and more students are now applying for the program of experimental education in the universities. The main reason is that many people think the characteristics of experimental education can allow the students to develop their potential and retain their unique personality.

People may be curious about the kind of students who are suitable for experimental education. “Anyone can apply for experimental education, but the main point would be whether they are ready or not. If freedom is at their disposal especially in decision-making, are these students ready to take the responsibility？” Lin said in International Innovation Education Forum. Chen shared the same opinion with Lin. She said, “If you don’t have self-discipline and strong motivation to learn, this kind of education might not be appropriate for you.”

When it comes to the integration of experimental education and traditional education in the universities, Chen said she was pleased to see this trend which had made some changes in National Tsing Hua University, National Chiao Tung University and National Cheng Kung University. She also mentioned that a lot of famous universities around the world, such as Yale University, Princeton University, Brown University and Stanford University also have programs like “Self-Designed Major” or “Independence Concentration. ” She’s looking forward to see how this trend can affect more schools and students in Taiwan in the future. “It would be great if more and more people are willing to trust the students to decide what they want to learn and be responsible for their own study and academic performance,” Chen said.